As adults we understand that we serve our youth without any expectation of reward or recognition.  With that said the Catholic Committee on Scouting understands that a great deal of the youth awards would not be earned without your help and we love to hear about it and recognize those deserving individuals. Please visit this list of prior recipients:

List of adult award recipients in the Sacramento Diocese

If you know of an adult that has assisted scouts in earning their religious award or has made any contributions in the name of Catholic Scouting please let us know.  Thank you.

The St. Elizabeth Ann Seton recognition was inaugurated in 1980 to recognize the meritorious contributions of adults who serve Catholic youth through Girl Scouts, Camp Fire and American Heritage Girls. This medal affirms the work of those who help youth develop their spiritual lives within the context of these organizations. It is ordinarily received before the St. Anne Medal is earned, but is not a requirement for receiving the St. Anne Medal.

The St. Anne Medal is the highest national recognition for adults who serve Catholic youth through Girl Scouts, Camp Fire and American Heritage Girls. The recognition was inaugurated in 1957. The purposes of the St. Anne recognition are to honor the outstanding services of adults who contribute to the spiritual development of Catholic young people in these organizations and to further Catholic adult leadership in youth ministry through these national youth-serving organizations. 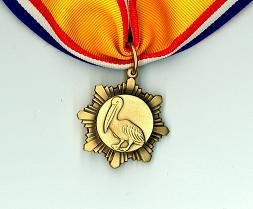 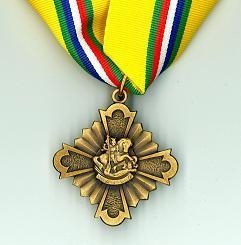 The National Catholic Committee on Scouting®, acting through the local diocese or eparchy, may award the St. George emblem to members of the laity and clergy, Scouters and non-Scouters alike, who have made significant and outstanding contributions to the spiritual development of Catholic youths through Scouting.

The recipients of the emblem are to be sought after and selected by an active committee of the (arch)diocese/eparchy. This committee is to be newly-appointed each year by the diocesan Scout chaplain or chairperson.

Nomination forms should give a detailed description of how the nominee provides outstanding contribution to the spiritual development of Catholic youths through Scouting in the Catholic Church. It is improper to nominate oneself or one's spouse.

General Scouting achievements do not qualify a person to receive the St. George emblem. The Boy Scouts of America has district, council, regional and national awards for such recognition.

Guidelines for nomination and selection:

List of adult award recipients in the Sacramento Diocese