How FertilityCare and NaProTechnolgoy can Help with Infertility

Struggling with infertility and miscarriage is certainly a great burden for couples to bear, especially when they so deeply desire to have a child and live out their vocation to be open to life and welcome the gift of children from God.

While infertile and sub-fertile couples are asked not to make recourse to IVF or other artificial reproductive technologies (ART), the Church invites them to seek diagnosis and treatment from a growing field of health care professionals who are trained to provide medical and surgical infertility care that is in harmony with Catholic teaching.  These services are typically as (or more) effective than IVF in achieving pregnancy, while being less invasive, less expensive and less emotionally draining.  For a review of how these services work, please go to this webpage and watch the imbedded video link:

To find out more about local Catholic infertility resources in the Diocese of Sacramento contact Andreya Arevalo , Coordinator for Family Life Ministries at 916-733-0133 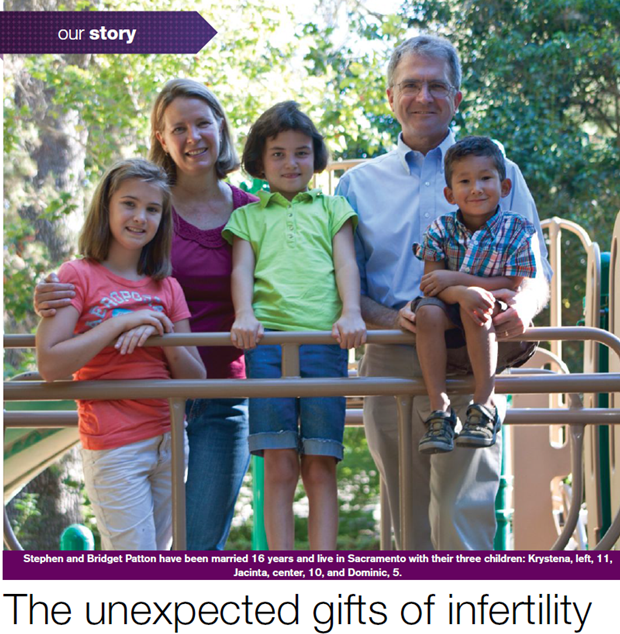 Steve and I began our marriage just knowing that it wouldn’t be much beyond nine months before we would be holding our own perfect little newborn. Granted we were both 38, but we were both healthy and otherwise “successful” people. And the Natural Family Planning charts we had observed during our engagement looked normal enough.

It had been overwhelmingly clear to everyone else about how our relationship – including the way we had met and gotten engaged – had been part of a divine plan. Surely a brood of our own little ones would follow easily and naturally, right?

Well, six months of marriage and no pregnancy made us begin to wonder. We took a naturalist approach first – dietary changes and supplements – but that didn’t help. By our first anniversary, we heard about Dr. Tom Hilgers (at the Creighton University School of Medicine) and his newly developing science of NaproTechnology. Not only was he achieving remarkable results with infertile couples, but he was doing it fully in keeping with Catholic teaching.

When I first walked into the waiting room of the Pope Paul VI Institute in Omaha, Neb., what first caught my eye was a wall covered with photos of babies, children, parents and families. We felt immediately wrapped in the warmth of a love for life.

Nine months after first meeting him and his staff, Steve and I were blessed with the announcement that I was pregnant. As we watched our little one’s heart beat at five weeks, our hearts overflowed with joy and gratitude. That was only to last for a month, however.

The next ultrasound showed no heartbeat. Our tiny child had died. The brimming joy of a brand new life all too soon gave way to the numb sorrow of a very early death. But we wanted our joy, not our sorrow, to be our lasting memory and so we named our little one Cause of Our Joy, one of the titles of the Blessed Virgin Mary.

We kept our hope up for a while longer, but as we began progressing through our early 40s, it was dawning on us that we would not likely conceive another child. God was asking us to bear the cross of infertility. Hard as it was to carry, another would be added.

We still knew we wanted to be parents, so we turned to adoption. We ended up suffering through not one, but three failed adoption attempts. So, not only could we not conceive a child the normal way, we couldn’t even adopt one the normal way.

While we didn’t give up hope of adopting, we decided that while we were waiting, we would provide state-licensed foster care. God was quietly preparing the way.

Five years, two months and 17 days into our marriage, we got a call from our assigned caseworker. “We have a newborn girl, will you take her in?” What a little beauty she was: a full shock of hair, eyelashes to die for, elfin eyes and a bubbling, happy spirit.

With foster care, when you take a child in you never quite know how long she or he will stay. We had already taken in a boy a few weeks earlier, only to see him leave a month later. But in Krystena’s case, her stay was for life.

Within six months, it was clear to the state that it was never going to be safe for her to return to her biological parents, and we were asked if we would adopt her. Oh yes! And so our little Krystena was ours.

Jacinta came shortly afterwards. An ob-gyn friend of ours contacted us out of the blue: She had a birth mom who wanted her child to be adopted and our friend thought, knowing our story, that we would be the right fit. Was she ever right!

We were introduced to Jacinta’s biological mother when Jacinta was five months old in her mother’s womb. God had cleared the way for our dear little, dark-eyed and deep-spirited Jacinta to be placed in our arms at birth.

Before we knew it we were a family of four, and it had happened in ways we could never have imagined or even prayed for at the beginning of our marriage. But God wasn’t finished with us yet.

Six years later, having already turned 50, God stirred within Steve’s and my hearts. We decided, “Let’s welcome one more.” We reactivated as foster parents and asked for a boy under two. We first took care of an 8-month-old boy for about a month and then we welcomed in a 15-month-old.

He was sick and scared when he arrived, but after several weeks of good meals and loads of “TLC” – which the four of us were delighted to give – he emerged as a spunky and bright little boy.

And, as with Krystena years earlier, we were soon asked if we would be willing to adopt him. Again, yes! And so he became our Dominic.

What is the moral of our story? Children are gifts freely given by God. We can and should ask him for these gifts, but we can never expect him to give them – not in the way that we might have expected. That is the nature of a gift.

Naturally conceived children are God’s normal gift for married couples, but with some couples that is not his plan. But even if God might not give his gifts to these couples in the normal way – in the way they might have expected – he still wishes to give gifts to them.

Steve and I cannot imagine how a family with three naturally conceived children could be any happier and more grateful than we are with our three adopted ones. But we could never have known that when we began our journey together as a married couple.

Click here for a downloadable PDF of this story.