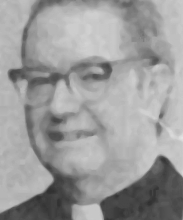 Status: In 1992, pleaded guilty to charge of lewd and lascivious conduct with a minor and was sentenced to five years’ probation. Deceased in 2004.
Diocesan Response: Reported to law enforcement in 1988 after report was received.
Year of Birth: 1915
Seminary Attended: Alma College
Date Ordained / Connection to Diocese: Ordained 1946 as priest of the Jesuit religious order