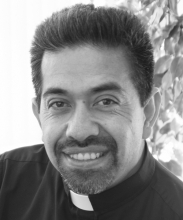 Status: Pleaded guilty to unlawful sexual intercourse with a minor in 2014, and was sentenced to 90 days in jail and probation.
Diocesan Response: Removed from ministry upon receipt of report. Dismissed from the clerical state in December 2014.
Year and Place of Birth: 1969, Mexico
Seminary Attended: Mount Angel Seminary, Oregon
Date Ordained / Connection to Diocese: Ordained January 2011 as priest of the Diocese of Sacramento