Following the Monday morning Mass at St. Peter’s Basilica, Bishop Weigand, me, and the other bishops from California, Nevada, and Hawaii were bussed directly to the Apostolic Palace for the audience with the Holy Father, Pope Francis. We were still arrayed in cassock, as is the custom for meeting with the current occupant of the Chair of Peter.

It is difficult to compare the meeting with the Holy Father to any other meeting of a social or political nature. In my previous reflection, I had commented on the visit of St. Paul with Simon Peter, an encounter related both in the Acts of the Apostles (Acts 9:26-30) as well as the Letter to the Galatians (Gal 1:18). Those meetings may have been the one of the first, if not the very first Ad Limina visit in the tradition of the Church. Those scriptural reflections highlight both the personal as well as ecclesial significance attached to the meeting with the successor of Peter.

While Pope Francis now resides in a room located at one of the residences in Vatican City, the visit with him was conducted at the Apostolic Palace. We arrived by shuttle bus and were greeted by the members of the Swiss Guard. They clicked their heels and straightened up to salute as we disembarked from the bus. The group was shuttled up on old elevator to the floor of the Renaissance era palace upon which was the private library of the Pope. We were escorted through several rooms, filled with murals, frescos, mosaics, paintings, period furniture, marble busts and the muted sunlight from a dull grey sky filtering through the windows.

The audience was delayed a few moments to provide the Holy Father an opportunity to greet a member of the Swiss Guard and his family. I was not sure of the nature of visit. The arrival of one of the Vatican sentries and his family brought a cheerful, disarming grace to the nervous air among us. The bishops admired this unexpected view of the human dimension of the Vatican and the personal manner with which the Holy Father relates to his co-workers. The family, especially the children, cast their eyes with curiosity as they walked through the middle of the large clutter of cassocks. The parents gave us a shy smile, conscious their gathering with Pope Francis was proceeding our own. They were ushered through the door into the Holy Father’s study.

The group returned to chatting among ourselves. After a few moments, the mother herded her children bouncing and skipping out from their meeting with Pope Francis. Then the father came out, bearing a broad smile and his medieval-style helmet. His Swiss Guard gait betraying a happy bounce.

Quickly, the Monsignor assisting the Holy Father put us into the order. The procession into the Papal study began. Pope Francis took his place close to the door into his study. As each diocesan bishop entered, he greeted the Holy Father and then introduced other bishops or priests who accompanied him. When it was my turn I introduced myself and presented to him a small gift assembled from the three university students of the three Newman Centers in the Diocese of Sacramento. 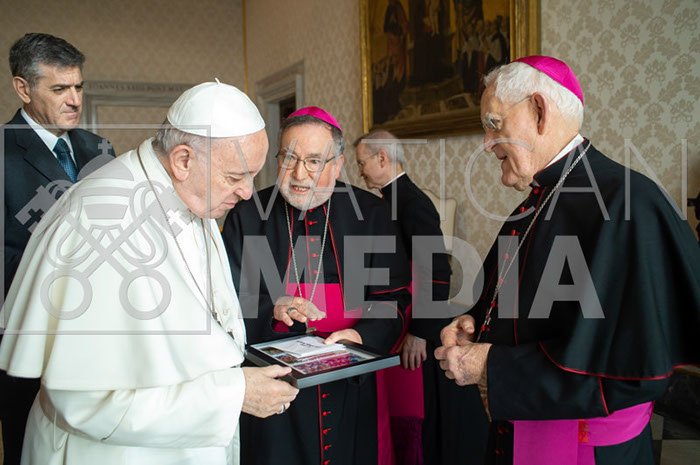 While he admired the framed photos of young Catholic students from Chico, Davis, and Sacramento, I introduced Bishop Weigand at my side. Bishop Weigand took Pope Francis’s hand, drew close to him and said, “Somos de la misma edad.” (We are of the same age.) With one hand still clasping Bishop Weigand’s hand, the Pope rested his other hand on their fraternal grasp, giving a sly smile in response, “Entonces, los dos somos jóvenes.” (Then, we are both young.) Bishop Weigand related to the Pope that he had been a bishop for 40 years. The Holy Father rested his free hand on his brother’s shoulder. “Has cargado mucho peso.” (You have carried much weight.) They continued to chat. Bishop Weigand spoke about his many years of ministry in the Archdiocese of Cali, Colombia. To which the Pope said, ”That’s why your Spanish is so good.”

What a blessing to share that apostolic yet fraternal, personal moment between my predecessor and the successor of Peter. Sharing in that moment made me more appreciative of the relationships that bind us to one another. In that fraternal communion, we are also bound closely to Christ who has called us to love Him and feed His flock. With the renaissance splendor of the apostolic palace around us, the humble, personal, and tender conversation between two brothers who are disciples of the Lord gives substance to the apostolic tradition. As important as the magisterial teaching and traditions of the Catholic Church is the practice of ecclesial communion lived out in the personal ascetic of fraternity. In that sweet moment at the door of the Papal study it was clearly a blessing and a duty. To paraphrase an expression of the well-known Catholic laywoman, Dorothy Day, it is the duty of delight.