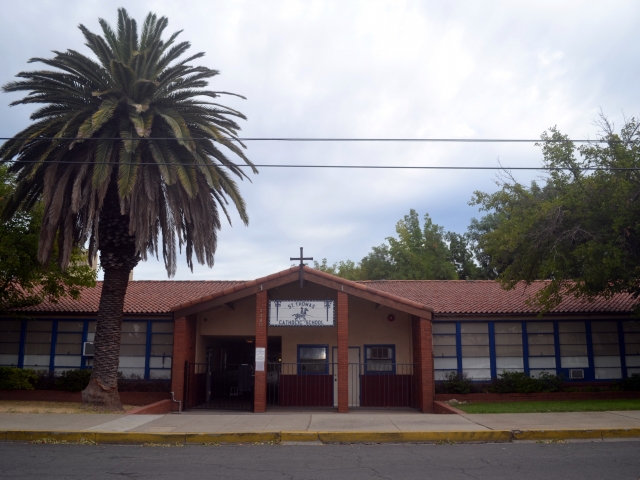 St. Thomas the Apostle Parish began planning for a parochial school in 1950. The Franciscan Sisters of Atonement established a convent in a rental house near the church and began teaching religious education to local public school children. They continued in this mission until July 1955, when they left to work in other areas with greater needs.

The Parish began a fund raising campaign for the construction of a school in 1954. In the Fall of 1955, St. Thomas the Apostle Parish School was opened for grades one through six in three classrooms. Four Franciscan Sisters of the Sacred Heart arrived to staff the school and convent in August, 1955, teaching approximately one hundred and forty students who enrolled.

The building of Oroville Dam in the late 1950s and early 1960s caused a surge of workers into the Oroville area and induced an increase in parishioners and students attending St. Thomas. Two classrooms were added to accommodate the increased enrolment. By 1959 enrolment had swelled to two hundred and forty students and the Parish purchased additional land for expansion and playground use.

When the construction of the dam was completed, many workers lost their jobs and moved out of the area; subsequently, enrolment at the school declined.

The Sisters were unable to return to St. Thomas after the 1975-1976 school year and lay faculty were hired to replace the nuns.

In 1977 a Kindergarten was established. In 1981, St. Thomas the Apostle Parish School became the first school to be accredited by the Western Association of Schools and Colleges (WASC) in the Oroville area; the school continues to meet the accreditation standard.

A ministry of
St. Thomas the Apostle Parish - Oroville