Julio Perez, a married 29-year-old structural design technician, serves as grand knight of St. Rose Council 16475 in Sacramento, California. Under his leadership, Council 16475 was the top council in California for membership growth during the first quarter of 2022.

I grew up in Los Angeles and then moved to Sacramento, where my parents, who are from Mexico, rediscovered their Catholic faith. This had a big impact on me. I started seeing the difference in my parents, the love they were showing, and that’s when everything started clicking. After my father joined Council 16475, one of the guys at St. Rose Parish invited me to join. It felt like a calling. 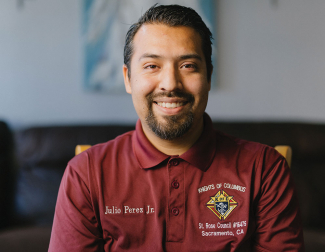 I had been a Knight for only nine months before being elected grand knight. Some of the brothers were saying, “Julio, you should do it,” but I resisted. I even asked God, “Why me?” But in that process, I thought about ways I could help the council and prayed more, and it became clear: “OK, I’ll do it.” I began during the pandemic, so it was difficult. They closed the church, and we were all struggling spiritually. But one thing I kept hearing in my head was “perseverance.” So we moved forward. Members became more active, and new members started joining.

In Service to All

As a Knight, keeping the faith is central, both personally and in the community. I also love the fact that our goal is to help anyone who’s in need and to help our parish priest as much as we can. For me, it’s the joy of taking action. Our council is growing and getting stronger. Our men are excited with the activities that we’re doing, and the community is saying, “Wow, the Knights, they’re helping us and the parish.”

One of the challenges I’ve seen is the language barrier that sometimes causes separation between Spanish speakers and English speakers. But we’re one Church, so as a Knight I’m trying to bring them together more. Another challenge is the stereotype that younger people are not able to accomplish things. But I’ve been told that just being a young leader has motivated others. Also, guys my age see me, and they get productive, which makes me more productive. So it goes back and forth. Another thing I would like to mention is that we pray the rosary before our meetings. It’s great that we get together, but we also need to get spiritually filled together. When our faith is growing, our numbers will grow too.

Reprinted and shared with permission from the Knights of Columbus. See original press release here.