While he never envisioned teaching fifth graders using such a wide range of technology in his classroom, James Walker of St. John Vianney School in Rancho Cordova has mastered his role in “dual learning,” where some of his students are in the classroom and others learn from home via live stream.

“I try to make it so all the kids have as close to the same experience -- that everyone has that feeling of belonging and of class unity,” says James, who is in his first year at St. John Vianney School and in his 20th year as a Catholic school teacher in the diocese.

“We had been implementing technology in Catholic education for a while, but never in a million years would I think I’d need a computer with a camera and microphone and a large screen TV just to be able to teach my students,” he says. “The learning curve has been astronomical, but our school made sure we had the tools we needed to do the job. Parents had a choice whether to keep their kids at home or send them to school and the kids are resilient and adapt pretty readily.”

Students receive temperature checks when they are dropped off in front of the school by their parents. Teachers then screen students for COVID-19 related symptoms prior to admitting them into their classrooms. Desks are kept at a distance from one another and all students, teachers and staff wear masks. Hallways are marked so students only walk in one direction, cutting down on congestion. 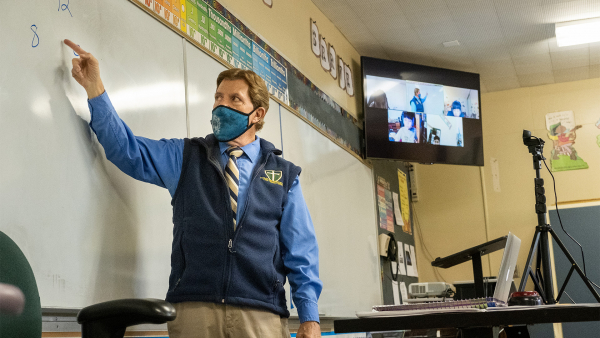 Students don’t share school supplies and James’ classroom was emptied of bulky items like bookshelves to make room for returning students. He has 16 in class and four students at home who sign into Zoom. On a large, flat screen TV in the corner of the room, students in the room can see their classmates at home. Instead of one time for recess among students, school officials scheduled six recesses to keep students separated even outside of the classrooms. Lunch is enjoyed in the classrooms at the students’ desks after they have had the chance to sanitize both their hands and tabletops.

James stands in front of the whiteboard. When he asks a question, students in class or at home raise their hands when they are ready to share their thoughts. He uses markers to write out assignments and notes. He can also punch up videos on his laptop for all students to see.

An alum of St. Mel School in Fair Oaks and Jesuit High School in Carmichael, James earned his bachelor’s degree and teaching credential from CSU-Sacramento. He was teaching at a public high school and adult education when one Sunday at Mass the priest’s homily about “coming home” to the church touched him so much that he decided to become a Catholic school teacher as his career.

“I knew there was something missing in my life and then I realized what it was – I didn’t have a chance to invite God into my classroom. It goes back to my mom and dad (Marie and James Sr.), who made sure I had a good, strong Catholic education. We prayed and went to Mass together, and faith was a major part of my life. So when I made the choice to work in Catholic schools, I fell in love and said this is where I want to be.” 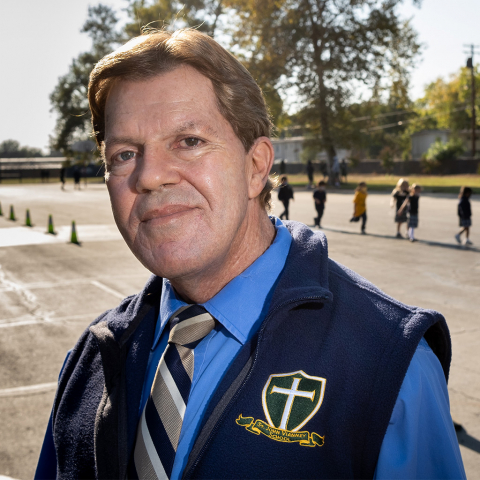 Since that time he’s taught various grade levels and served in administrative roles at six schools in the diocese. He taught fourth and fifth grades at Holy Family School in Citrus Heights, but when the school closed in June 2020, he accepted the fifth grade assignment at St. John Vianney. He always attends weekend Mass at the school where he is currently teaching.

Two decades later, he’s more certain of his choice than ever. “I was hired at St. John Vianney the Friday before school started and the staff and faculty were great in helping me get up and running. The parents are great, the kids are wonderful, the principal (Amy Hale) is fantastic. The community is welcoming and warm. It feels like home.”

When he thinks back to March 2020, when all elementary schools transitioned to distance learning, “I feel proud and blessed to be part of the diocese as a teacher,” he says. “You could say that Catholic educators took the bull by the horns, embraced distance learning and made sure our kids didn’t lose out even one day. St. John Vianney and all schools in the diocese have done what it takes to make sure our kids get the education they deserve.”