The Diocese of Sacramento has two patron saints:

Our Lady of Guadalupe

Mary, the mother of Jesus, appeared on Dec. 9, 1531, to a simple peasant, Juan Diego, on a hill near Mexico City. She is known and venerated as Our Lady of Guadalupe. Her feast day is celebrated on Dec. 12. This appearance of Mary is the only one on the North American continent that is officially recognized by the Catholic Church.

Our Lady of Guadalupe is not only the patroness of the Diocese of Sacramento but of two other California dioceses as well, Orange and San Bernardino. Furthermore, she has been declared the Patroness of all the Americas. A beautiful painting of Our Lady and Saints of the Americas is located in the north chapel in the Cathedral of the Blessed Sacrament. There is also a downtown parish in Sacramento named for Our Lady of Guadalupe.

As a young man, Patrick was captured and enslaved for six years; he escaped, but felt called to go back to Ireland to proclaim Christ. There he established churches and primitive monasteries. Statues of St. Patrick can be seen at the entrance to the Cathedral of the Blessed Sacrament, as well as within the Cathedral, near the chapel of the Eucharist. 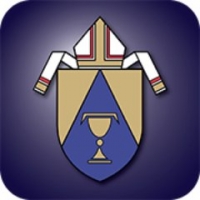