Coat of Arms of the Most Reverend William K. Weigand

By heraldic tradition, the arms of the bishop of a diocese are joined with the arms of his jurisdiction.  Thus, the left side of the shield represents the Diocese of Sacramento, and the right side represents the personal symbols of Bishop Weigand.

The arms of the Diocese of Sacramento (left side) are composed of a blue field with gold that appears to be draped from the top of the design. This appearance, combined with the gold chalice and corporal, reminds us of the Blessed Sacrament in a tabernacle — representing the name of the See City of the diocese, Sacramento.  Gold is the color of liturgical feasts celebrating the divinity of Our Lord and blue is the time-honored color of the Blessed Virgin Mary, who carried the Divine Child in the tabernacle of her womb.  The gold color further reminds us of the foundations of the Diocese of Sacramento, established in the midst of the Northern California Mother Lode, by the first Bishop of Sacramento, Patrick Manogue, himself originally a pioneer gold miner.  These arms of the Diocese, while simple, are replete with significance.

The personal arms of Bishop Weigand (right side) were adopted when he became Bishop of Salt Lake City, and represent his life as a priest and bishop.  The field of the Bishop’s arms represents building blocks, signifying the building-up of the People of God.  This is realized through the  formation of interlocking Christian communities.

The shepherd’s staff (crosier) in the center of the arms recalls the Bishop’s baptismal patron, Saint William, who was both an abbot and bishop, and further depicts the role of the Bishop as pastor and shepherd.  The shepherd pastors his flock through evangelization, proclaiming “in season and out” the Word of God (signified by the open Bible in the upper section) that Jesus, the Savior, is present in their midst.

The fish (pronounced “ICHTHYS” in Greek), superimposed on the Word of God, is an ancient symbol of Jesus.  (“ICHTHYS” in the Greek language was used as a monogram to mean “Jesus Christ, Son of God, Savior”.)  By proclaiming the Word of God, the flock is formed into a community of believers around the person and presence of Jesus Christ as “living stones built as an edifice of the spirit.”  (1 Peter 2:5)  The fish and ICHTHYS also recall the Eucharist, which, together with the Word of God, form and nourish the People of God.

The fully heraldic achievement is represented in six colors: red, black, white, gold, blue and green.  The red, blue, and gold are found in the national flag of Colombia where Bishop Weigand served in the missions for 10 years. The red, white, and blue are from the flag of the United States of America.

The shield is completed with the external ornaments which are a gold processional cross, in this case a Celtic cross to honor the Irish heritage of the Bishop, which is placed in back of the shield and which extends above and below the shield, and a pontifical hat (called a “gallero”) with its six tassels, in three rows on either side of the shield, all in green. The latter is the heraldic insignia of a prelate of the rank of bishop, as prescribed by the Holy See. 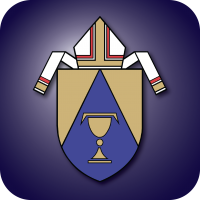