Bishop Jaime Soto became the ninth Bishop of Sacramento in November 2008 after serving for about one year as coadjutor bishop. He formerly served as Auxiliary Bishop of the Diocese of Orange, appointed in March 2000 by his Holiness, Pope John Paul II.

For more information on Bishop Jaime Soto and his continuing guidance of the Diocese of Sacramento, visit Diocesan Bishop.

Early within his tenure, Bishop Soto began addressing the most pressing matters of the day, namely, how to effectively preserve the legacy of Catholic education, and facilitate a new era for Catholic schools.  Further, Bishop Soto forged commitments to further develop The Catholic Foundation, while also setting new standards for charitable support via appeals and stewardship to countless agencies in the midst of economic recession.  Bishop Soto also continues to foster and encourage vocations, as diocesan population statistics soar and pastoral needs across the 20-county Diocese grow.

On January 27, 1994, Bishop William Weigand, former Bishop of Salt Lake City, was installed in the Cathedral of the Blessed Sacrament as the eighth shepherd of the Diocese of Sacramento.

With the completion of the new Diocesan Pastoral Center in early 1994, the Bishop’s Office (the former Chancery) and twelve of the Diocesan departments relocated their offices in the Pastoral Center in January and February of that same year. These offices, needed to aid in the Church's mission to proclaim the Gospel, had previously been spread throughout the city. The new Pastoral Center was blessed by Bishop Weigand on June 10, 1994.

Five months after Bishop Bell retired, Pope John Paul II named Francis A. Quinn, then an auxiliary Bishop of San Francisco, as the seventh Bishop of the Diocese of Sacramento. He was installed February 18, 1980, in the Sacramento Memorial Auditorium. Two years later, on September 1, 1981, John Paul II selected Father Alphonse Gallegos, O.A.R., Director of the Hispanic Affairs Division of the California Catholic Conference, as an auxiliary Bishop to Francis Quinn. He was ordained Bishop in the Cathedral of the Blessed Sacrament on November 4, 1981. Nothing but pastoral, Bishop Gallegos’ life was cut short in an automobile accident. Thousands of people gathered for his burial rites in the Cathedral of the Blessed Sacrament on October 11, 1991.

In 1985, the deanery structure of the diocese was revised to comprise 15 geographical areas. Each priest appointed to be a dean was officially installed at the Cathedral of the Blessed Sacrament on May 30, 1985.

Bishop Quinn called for a year of celebration as the Diocese reached its hundredth birthday: 1886-1986. The year was filled with remembering, preparation for the celebration and a search for our own history. The event itself was noted by local television companies and filmed.

Bishop Francis Quinn’s request to retire was accepted in 1993.

Pope John XXIII, on March 30, 1962, appointed the Most Reverend Alden J. Bell, D.D. , auxiliary bishop of Los Angeles, to become the sixth spiritual leader of the Sacramento Diocese. He was solemnly installed on May 15, 1962, in the Cathedral of the Blessed Sacrament. On September 15, 1966, Alpine County was transferred from the Diocese of Sacramento to the Diocese of Stockton by Sacred Decree.

On February 27, 1974, Pope Paul VI appointed John S. Cummins as an auxiliary to Bishop Bell. However, within three years, he was selected as the second Bishop of the Oakland Diocese, leaving Bishop Bell without an auxiliary.

Bishop Bell retired on July 11, 1979. He was 75 years old. His years in the Diocese of Sacramento were busy ones since they demanded a flexibility in allowing and promoting the changes brought about because of the second Vatican Council. He surrounded himself with men who were leaders in the field of social action and education. He also strongly encouraged the emerging lay ministry in the Diocese. Bishop Bell died on August 28, 1982.

Most Reverend Joseph T. McGucken, S.T.D., L.L.D. , auxiliary bishop of Los Angeles, was appointed coadjutor bishop of Sacramento on October 26, 1955, and succeeded to the See upon the death of Bishop Armstrong. He was born March 13, 1902, in Los Angeles and was ordained in Rome January 16, 1928.

On February 21, 1962, Pope John XXIII appointed Bishop McGucken fifth Archbishop of San Francisco where he was installed on April 3, 1962. At the same time, His Holiness announced a sweeping change in Northern California diocesan boundaries with the creation of three new dioceses: Oakland, Santa Rosa, and Stockton.

The fourth man to be consecrated Bishop of Sacramento was Father Robert Armstrong. Born in San Francisco in 1884, he and his family moved to the Pacific Northwest, where he lived most of his life until he was appointed Bishop on January 4, 1929.

For 28 years Bishop Robert Armstrong served as a Bishop of the Diocese that originally comprised 91,562 miles. He inaugurated a period of considerable growth in which over 28 new parishes were established; the work of taking care of the socially disadvantaged was professionalized; and the quality of Catholic schools was upgraded. Bishop Robert Armstrong died after a long illness on January 14, 1957.

Patrick J. Keane, D.D. (1872-1928), a priest from the Archdiocese of San Francisco. He was consecrated as an auxiliary Bishop by Bishop Thomas Grace on December 14, 1920; he succeeded him as the third Bishop of the Diocese on March 17, 1922. His short tenure of six years was characterized by the formation of a system of parochial schools. He died September 1, 1928.

On June 16, 1896, Father Thomas Grace (1841-1921) was consecrated the second Bishop of the Diocese of Sacramento. For 25 years Bishop Thomas Grace guided the Diocese through a period of transition from its pioneer days to a more modern period. He was indefatigable in traveling the length and breadth of the Diocese, even against the advice of friends.

The man who took O'Connell's place was one of the legendary figures in California history, Patrick Manogue. Student, gold miner, seminarian, and priest of the Comstock, Manogue built the Cathedral of the Blessed Sacrament when he became the first and founding Bishop of a new Diocese created on May 28, 1886, by Pope Leo XIII. The Pope also added 10 counties in Northern California and eight in Nevada  to the new Diocese of Sacramento. Bishop Patrick Manogue died on February 27, 1895 in the Cathedral rectory.

Bishop Eugene O’Connell served as the first and founding Bishop of the Diocese of Grass Valley, which would become the Diocese of Sacramento. He served from 1868 until March 17, 1884, when he resigned. He died in Los Angeles on December 4, 1891. 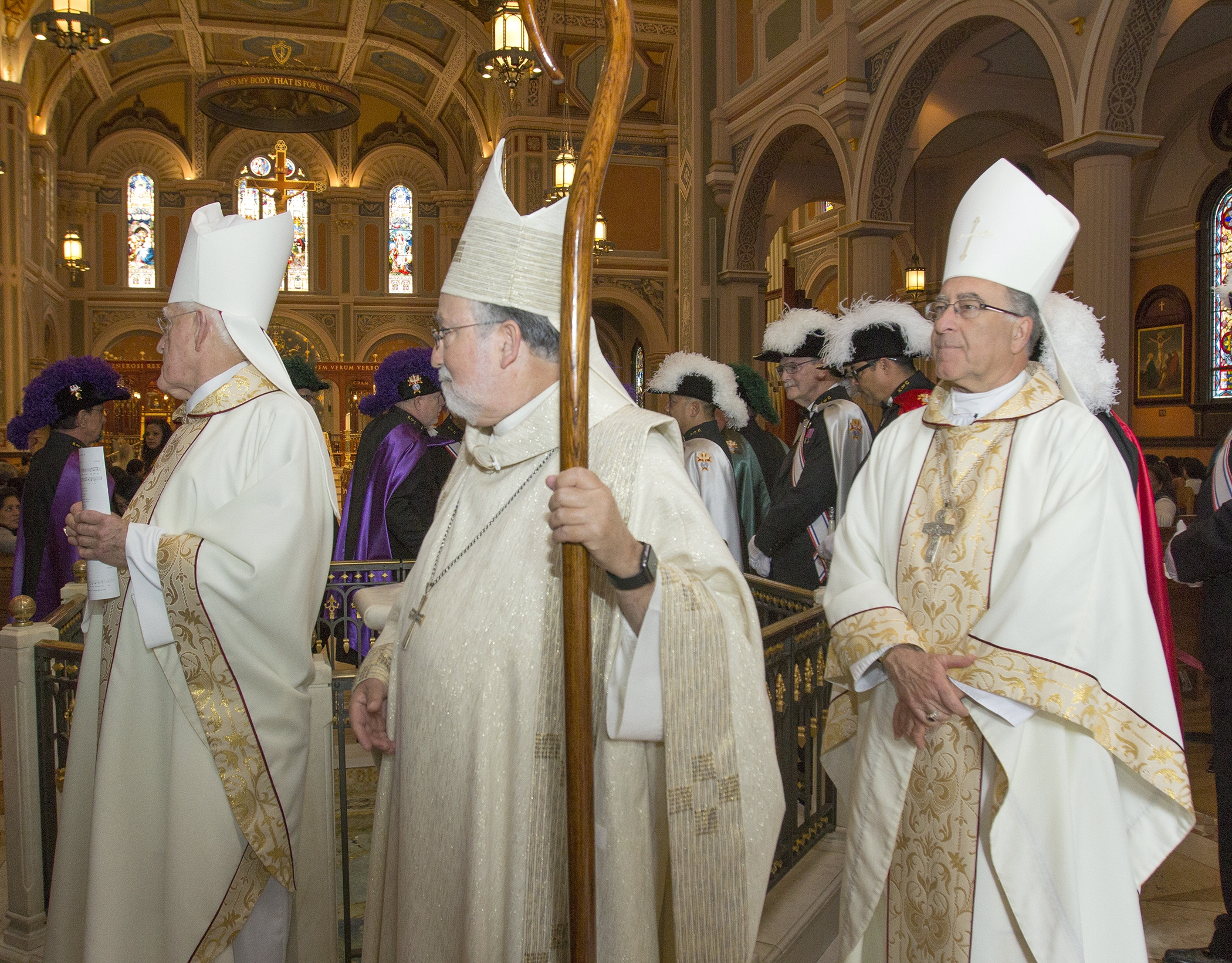