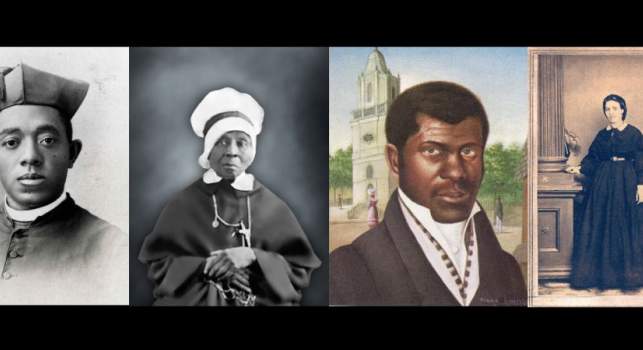 Please join us on Sunday, January 17, 2021, at 2:00 pm on Zoom to hear more about Venerable Henriette Delille. To join this meeting, click this link.

Venerable Henriette DeLille, was born a “free woman of color” before the Civil War, to a wealthy French father and a free Creole woman of Spanish, French, and African descent.

Henriette was educated in French literature, music, dancing, and nursing, She was prepared to become the “kept woman” of a wealthy white man throughout her childhood. However, in her early 20s, Henriette declared that her religious convictions could not be reconciled with the placage (concubinage) lifestyle for which she was being prepared.

Raised Catholic, she had a deep encounter with God and believed that the placage system violated Church teaching on the sanctity of marriage.

Working as a teacher since the age of 14, Henriette’s devotion to caring for and educating the poor grew.
In 1836, wanting to dedicate her life to God, Henriette used the proceeds of an inheritance to found with two other women a small unrecognized order of nuns, the Sisters of the Presentation of the Blessed Virgin Mary.

This group became the Sisters of the Holy Family, officially founded at St. Augustine's Church in 1842.

To view previous "Speaking the Truth in Love" talks, go to https://stbasilvallejo.org/open-wide-our-hearts and navigate to the 'Videos' tab on that page.